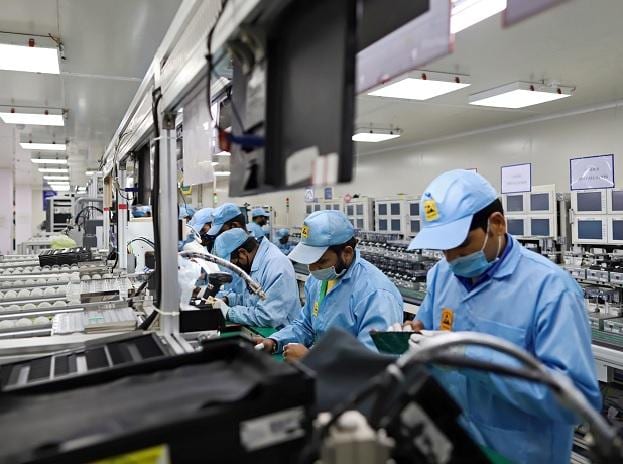 Amid coronavirus pandemic, India’s gross domestic product (GDP) grew at 1.6 per cent in the January-March quarter of fiscal year 2020-21, but witnessed a contraction of 7.3 per cent for the entire fiscal year, showed government data on Monday.

This is the first full-year contraction in the Indian economy in the last four decades since 1979-80, when GDP had shrunk by 5.2 per cent. This is also the second straight quarter of expansion since India exited a rare recession.

According to the National Statistical Office data, gross value added (GVA) growth in the manufacturing sector accelerated to 6.9 per cent in the fourth quarter of 2020-21 compared to a contraction 4.2 per cent a year ago.

Construction sector GVA grew by 14.5 per cent from 0.7 per cent growth earlier. Mining sector shrank by 5.7 per cent, as against a contraction of 0.9 per cent a year ago.

Electricity, gas, water supply and other utility services segment grew by 9.1 per cent in the fourth quarter, against 2.6 per cent expansion a year ago.

Similarly, trade, hotel, transport, communication and services related to broadcasting contracted by 2.3 per cent in the fourth quarter from 5.7 per cent growth earlier.

Financial, real estate and professional services grew by 5.4 per cent in Q4 FY21 from 4.9 per cent growth.

Public administration, defence and other services growth fell to 2.3 per cent during the quarter under review, from 9.6 per cent a year earlier.

The statement said the measures taken by the government to contain the spread of the pandemic have had an impact on economic activities as well as data collection mechanisms.

To regain Rs 145 trillion size, the economy will have to grow by 10-11 per cent in the current 2021-22 fiscal but the outbreak of the second wave of COVID-19 infections last month has disrupted the momentum of economic activity and many expect the GDP may not touch double-digit growth rate despite the low base.

GDP is derived as the sum of the gross value added (GVA) at basic prices plus all taxes on products less all subsidies on products. The total tax revenue used for GDP compilation includes non-GST revenue and GST revenue.

“The measures taken by the government to contain spread of the Covid-19 pandemic have had an impact on economic activities as well as on data collection mechanisms,” said a statement issued by the NSO.

India has recorded 28 million COVID-19 infections, behind only the United States, and 329,100 deaths as of Monday, although the rise has begun to slow.

The sectoral performance in Q4FY21 reveals that there was definitely a recovery in manufacturing, construction and finance, real estate etc numbers, which would have boded well for FY22. However, with the second wave leading to a closedown of services sector in particular, progress might remain muted.

The economy snapped out of technical recession in the October-December quarter of the financial year 2020-21 and expanded by a revised 0.5 per cent, after reporting two consecutive quarters of de-growth in the same fiscal. The GDP contracted by 7.3 per cent in the September quarter (second quarter) of the fiscal year 2020-21. The next release of quarterly GDP estimates for the quarter April-June 2022 (Q1FY22) will be on August 31, 2021.

The NSO had projected a GDP contraction of 7.7 per cent in 2020-21 in its first advance estimates of national accounts released in January this year.

The NSO, in its second revised estimates, had projected a contraction of 8 per cent for 2020-21.

The Reserve Bank of India (RBI) Governor-led Shaktikanta Das Monetary Policy Committee, in its first bi-monthly monetary policy review for the new financial year 2021-22, retained its GDP growth projection at 10.5 per cent in the current fiscal 2021-22.

“Looking forward, while the y/y numbers for the first quarter might look upbeat due to a low base, the sequential growth is likely to contract. In particular, with the spread of the virus more acute in rural areas in this wave, rural demand and sectors dependent on the rural economy might come under stress.

“With a more muted rural support this year, along with ongoing supply disruptions, we expect GDP growth at 8-10% for FY22, revised down from our earlier estimate of 11.5%,” Sakshi Gupta, senior economist, HDFC Bank, Gurugram told Reuters.

“The Q4FY21 GDP growth of 1.6% reflects the full impact of unlocking of the economy post COVID-19 shock (of first wave). While the second wave of infections has been much more severe, the absence of a stringent nationwide lockdown has been a positive.

“The impact during the second wave has been more pronounced on consumer sentiment and mobility rather than economic activity. The rebound in consumer spending would hence be more gradual than the first wave with vaccination being the key driver. We expect FY22 GDP growth at 10.5% vs our earlier estimate of 12.5%,” Garima Kapoor, economist- institutional equities, Elara Capital, Mumbai told Reuters.

Meanwhile, the second wave of coronavirus infections and deaths across the world’s second-hardest hit country has caused forecasters to trim their projections for the coming months.

The economy, which was facing a slowdown even before the pandemic, now confronts a crash of consumer demand – constituting over 55% of the economy – as household incomes and jobs have declined.

Unemployment soared to a near one-year high of 14.73% in the week ending May 23, according to the Centre for Monitoring Indian Economy, a Mumbai-based private think tank.

Finance Minister Nirmala Sitharaman, who said on Friday that no decision has been taken for another stimulus package, has limited space due to a fall in tax collections and rising public debt.