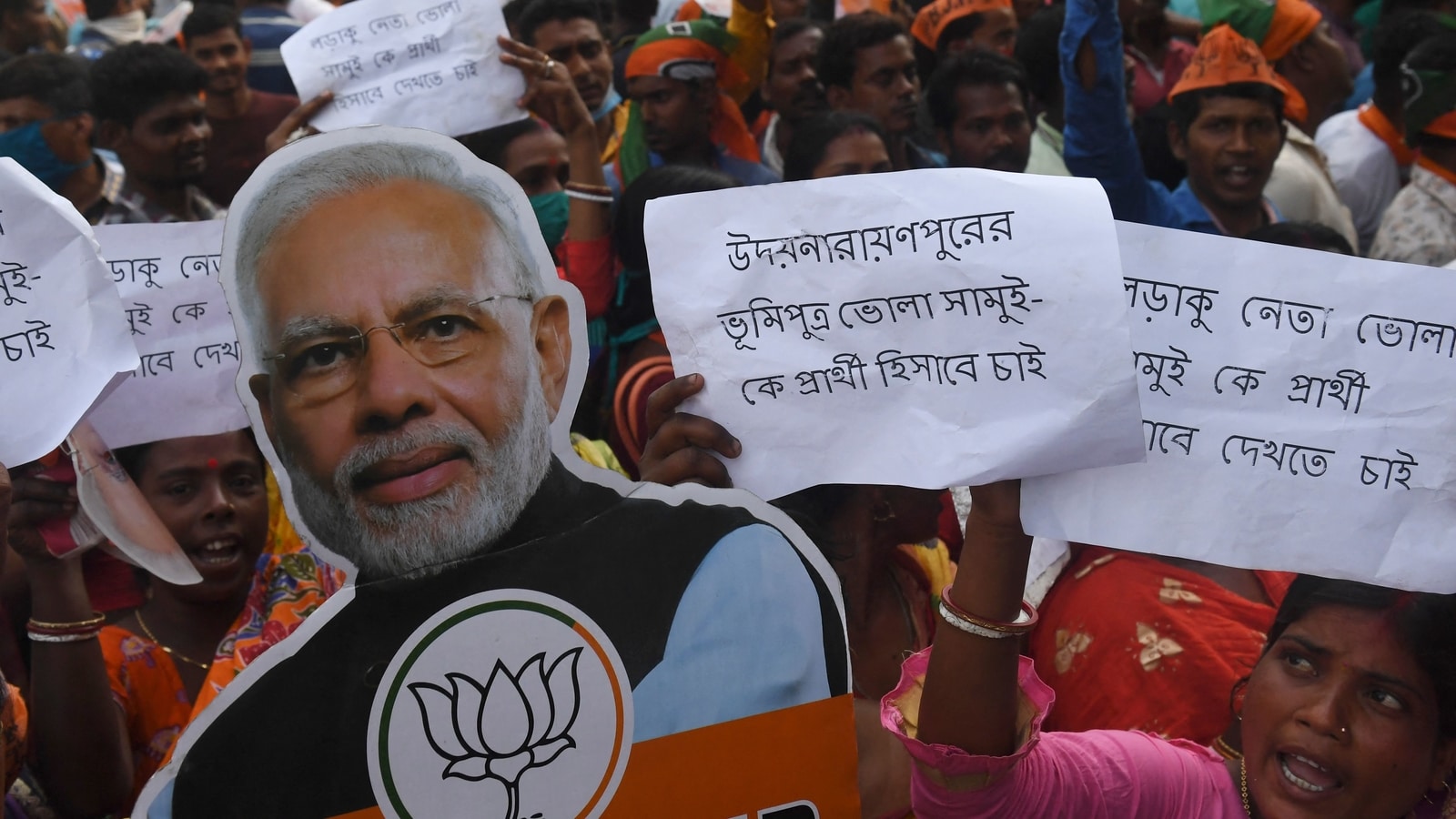 The muted celebrations on May 30 to mark the Bharatiya Janata Party’s seventh year in power at the centre are primarily on account of the death and devastation brought on by the second wave of the corona pandemic, however a slew of electoral upsets, especially in West Bengal, and allegations of governance deficit, have also forced the party to revisit its political strategy, party leaders aware of the development said.

The euphoria that followed the delivery of its key promises, the construction of a Ram temple at Ayodhya; the abrogation of Article 370 from Jammu and Kashmir; and a partial deliverance of the uniform civil code by way of banning Triple Talaq, has been dampened by the accusations of inadequate pandemic response, the leaders acknowledge.

The opposition has mocked the government alleging it made a premature declaration of victory in the war against the pandemic. It was also attacked for alleged reliance on non-scientific approaches to deal with Covid-19, allowing Kumbh Mela and focusing on state elections even as the cases had begun to show an upward trend.

“I, along with several other people, warned the Centre over the Covid-19 pandemic multiple times. The Centre made fun of us. The Prime Minister declared victory against Covid-19. The problem here is neither the Prime Minister nor the Centre has understood the viral disease till now,” Congress MP, Rahul Gandhi said on Friday.

In February, the national office bearers of the BJP passed a resolution commending the government’s Covid-19 response, while the world was “speculating over how India with its vast population and limited healthcare infrastructure” would face the challenge. It claimed it can be “said with pride that India not only defeated Covid under the able, sensitive, committed and visionary leadership of Prime Minister Shri Narendra Modi, but also infused in all its citizens the confidence to build an ‘Atmanirbhar Bharat’.”

However, during the second wave as the country struggled with rising cases of deaths and infections and staggering inadequacies in essential healthcare, party leaders were left to defend the government’s policies from vaccination to not announcing a nationwide lockdown amid rising public anger.

“This has been the most depressing time for the party. The blame for the many deaths was placed at the centre’s doorstep. And the public perception about the government’s abilities changed overnight. So, the party realised that it was time to withdraw from making statements. Even the Prime Minister’s messages have been fewer compared to the last time (first wave),” said a senior party leader, who didn’t wish to be named.

Many party leaders also admit that the lapses can have a severe impact on the party’s electoral fortunes. Therefore, for the upcoming elections in five states—Punjab, Uttarakhand, Uttar Pradesh, Manipur and Goa–the party is recalibrating its strategy to counter an aggressive opposition. Instead of extravagant outreach programmes that have been a key aspect of its politics, the party has opted for restrained messaging.

“The party brass has already instructed the cadre not to organise any celebratory events, even though they have been asked to highlight the achievements of the Modi government vis-à-vis getting vaccines, ramping up medical infrastructure and the welfare schemes such as providing 5 kg of food grains free-of-cost to around 80 crore (Pradhan Mantri Garib Kalyan Anna Yojana) beneficiaries during May and June,” said the functionary quoted above.

Party leaders have also been urged not to make desultory comments and refrain from promoting unscientific practices. “The focus has to be on the achievements made in the past seven years, from housing for the poor to social schemes. The idea is not to let the pandemic overshadow the past gains,” said the functionary.

Another party leader pointed out that assuaging public anger after the second wave is proving to be a challenge. “When demonetization happened, there was an explanation offered; similarly, there were reasons attributed to protests against legislation such as the farm laws and the citizenship amendment act. However, this time no explanation will cut ice,” he said.

A state unit president who did not wish to be quoted said the party leadership has had to face questions even from its own cadre. “The problem did not spare anyone. In many districts the party has lost dozens of local leaders or their family members. It is natural that there will be some anger and remonstration. We have also instructed our cadre not to politicise the pandemic,” the person said.

A few leaders assert that the current turmoil is unlikely to impact the party’s growth in the long term as the insufficiency and weakness in critical areas of health care that were exposed during the second wave cannot be pinned on the central government alone.

“The opposition led states, Maharashtra being a prime example, fared no better than the BJP ruled states. It is unfair to say that the failure belongs to the BJP. We admit there were problems, but we ensured that quick amends were made,” said a state level functionary from poll-bound UP.

The functionary said the BJP’s failure to win West Bengal has amplified the criticism; “The loss has given the opposition a chance to attack the BJP and to show that the idea of BJP’s invincibility in elections is a myth.”