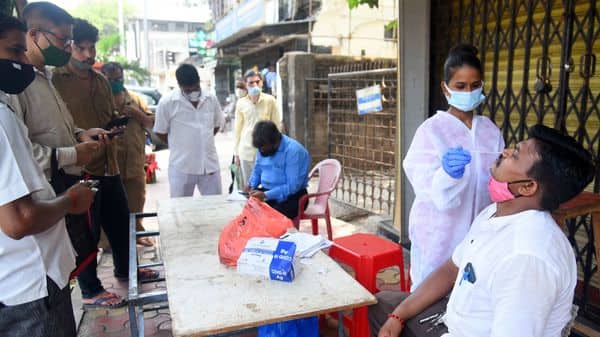 India reported a slight dip in new coronavirus infections in the last 24 hours with 4,01,078 more people testing positive. The cumulative caseload in the country now stands at 2,18,92,676, said the Union health ministry on Saturday morning.

Maharashtra continues to be the biggest contributor to the daily tally as the state reported 54,022 new cases on Friday. Out of these, 3,039 cases were seen in Mumbai.

However, the daily fatalities are continuing to show an upwards trend. As many as 4,187 more people succumbed to the disease in the last 24 hours, taking the cumulative death toll to 2,38,270.

This is the first time the country has reported over 4,000 deaths.

As states flag shortage of vaccines in the third phase of the inoculation drive, the central government has promised to provide more than 10 lakh doses to the states and union territories within the next three days.

While the government has opened up Covid-19 vaccination registrations for all adults, appointment slots tend to disappear as soon as they become available due to a supply crunch.

The country has turned to OPEC nations particularly Saudi Arabia, UAE and Kuwait for sourcing medical oxygen as infections reach a record high.

Oil minister Dharmendra Pradhan recently consulted with his counterparts in Saudi Arabia, UAE, Kuwait, Qatar and Bahrain to bridge the huge deficit of medical oxygen the country is facing.

“Had close consultations during the last week with my counterparts from Saudi Arabia, UAE & Qatar on ways to increase import of LMO into India. Deeply appreciate the initial gesture of goodwill with complimentary LMO supplies particularly from UAE, Kuwait, Bahrain & Saudi Arabia,” Pradhan tweeted.

He said state-owned Indian Oil Corporation (IOC) and gas utility GAIL will be arranging for logistics to transport the oxygen.

Commercial supplies of oxygen into the country are being secured.